The 4.2alpha category will be closed at the end of May. Currently, it is for browsing only.
If you have any comments or requests for 4.2 beta1 or later, please send them to Cubism Editor category .
The alpha version of the Editor will be available until the end of June, but we recommend you to move to the beta version when you use it.

When I am preparing models I often edit the texture in Photoshop as I am working. Re-importing the psd to update the texture is currently a bit cumbersome because it has to update the layout each time if I don't want to add new textures. But it has worked so far.

But I was curious if it is possible to add a new texture item to the existing texture map while preserving the generated layout. As explained in your tutorial video, it's easy to add a second texture map for new items. But if there is enough room on the original texture I would prefer it if I could place the new item on the same texture. It is not desired to have multiple texture maps for the same character if there is still plenty of unused space. It would be great if I could just drag the item from the second texture to the first texture in the psd import screen. I have not found a way to do this yet and could not find anything in your documentation on this topic.

I can place the new item on the existing layout with "reposition all layers freely" but this messes my entire model layout up most of the time and is thus unusable. 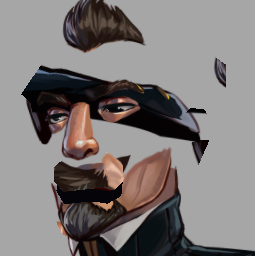 Am I doing something wrong?